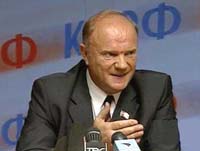 President Vladimir Putin will travel Thursday to Belarus to revive negotiations for a possible union. A trip could expand Putin's options after he steps down as president next year.

"I wouldn't be surprised if Putin tries to speed up a union with Belarus ... to become the president of the unified state," Gennady Zyuganov, Russia's Communist Party chief, said this week.

Medevedev, in turn, on Tuesday asked Putin to be his prime minister - but Putin has not yet accepted.

Putin says he intends to retain influence after his second term as Russia's president ends in May, although in what capacity is unclear. The creation of a single state could give him an alternative to accepting the Russian prime minister's post.

If the two countries can reach an agreement, it would mark the first merger of a former Soviet state with Russia since the U.S.S.R. split apart in 1991 - a step that would make many Russians proud.

But the move could further damage Russia's relations with the West, especially if Moscow is seen as using pipelines that supply Belarus with natural gas to force the smaller country into an agreement.

Some analysts doubt a deal can be reached, because Belarus President Alexander Lukashenko - a Soviet-style leader dubbed Europe's last dictator by the West - is unlikely to cede power.

Lukashenko's office said last week that the talks between Putin, Lukashenko and other ranking officials would focus on a draft constitution of a union.

Russia's Ekho Moskvy radio quoted unidentified members of the Lukashenko administration as saying that Moscow and Minsk had struck a deal: Putin, the sources said, would become president of a Russia-Belarus union while Lukashenko would become the speaker of its parliament.

Officials in Moscow and Minsk have denied the report, but politicians and commentators in both countries agreed that Putin's trip signaled a renewed interest in the long-discussed merger.

When Medvedev proposed that Putin become prime minister, many analysts saw it as the Kremlin's preferred plan to maintain Putin's influence after he leaves the president's office.

But some Russian commentators said Putin would never accept what would amount to a demotion.

The merger of Russia and Belarus would allow Putin to leave the Russian presidency, as he has pledged to do, yet still remain a chief of state.

Pavel Borodin, secretary of the existing Russian-Belarusian executive body, said Wednesday that drafts of the constitution being considered would give the president of new unified country the power to rule over current national governments.

He said the new constitution would be subject to approval by each nation's Parliament and would be put to voters in national referendums.

Putin could find it difficult to persuade the flamboyant Belarusian leader to relinquish his country's independence. And Lukashenko seems to lack the leverage needed to win an agreement that favors Belarus, which has a population of just 9.7 million compared to Russia's 141.4 million.

"Putin and Lukashenko have sought to outmaneuver and cheat one another over the past few years," said Fyodor Lukyanov, the editor of Russia in Global Affairs magazine.

Russia and Belarus signed a union agreement in 1996 that envisaged close political, economic and military ties, but efforts to achieve a full merger have floundered.

In the 1990s, Lukashenko pushed for the creation of a single state, apparently hoping to take reins from Russia's ailing President Boris Yeltsin. Putin's election in 2000 demolished Lukashenko's hopes to rule both countries.

Two years later the Belarusian leader angrily rejected a Kremlin proposal for incorporating his nation into the Russian Federation - a plan that would have left him without job.

Bilateral relations soured. Lukashenko described Russia as a "huge monster," saying Moscow's actions were worse than those of Nazi Germany, which reduced much of Soviet Belarus to ruins in World War II.

If Lukashenko refuses to cede control of his country, the Kremlin could try to force his hand by using its most powerful weapon: energy.

At the year's start, Russia more than doubled the price of natural gas and imposed a customs duty making oil more expensive. To pay its bills, Belarus was forced to sell half of its national gas pipeline company to Gazprom, Russia's state gas monopoly.

In August, Gazprom threatened to halt future natural gas shipments if Belarus failed to pay what it already owed.

The two sides negotiated a settlement, but the threat of a further increase in energy prices still looms over Belarus' heavily subsidized, Soviet-style economy.