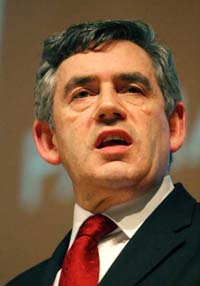 Ex-Taliban fighters in Afghanistan can win a role in the country's future if they renounce violence, British Prime Minister Gordon Brown said Wednesday.

"If they are prepared to renounce violence and abide by the constitution and respect basic human rights then there is a place for them in the legitimate society and economy of Afghanistan," Brown told lawmakers at the House of Commons.

He said Britain would not hold direct talks with ex-Taliban fighters, but support the attempts by Karzai's officials to widen Afghanistan's political sphere.

Britain is backing Afghan efforts to identify members of the Taliban - particularly midlevel commanders - who are prepared to participate in mainstream politics, a senior government official told reporters at a briefing. He spoke on condition of anonymity in line with government policy.

"Already some 5,000 fighters have laid down their arms," Brown said. British officials said 70 high or middle ranking Taliban leaders have been killed this year.