Samurai swords to be banned in England, Wales 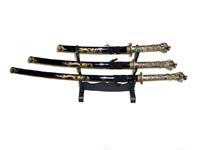 Samurai swords to be banned in England, Wales

A spate of crimes involving samurai swords led to ban of the importation, sale and rental of the weapon in England and Wales.

Legitimate collectors will be allowed an exemption, the Home Office said.

"In the wrong hands, samurai swords are dangerous weapons - there have been a number of high profile, serious incidents involving samurai swords in England and Wales in recent years," said Home Office Minister Vernon Coaker.

He added that the problem involved "cheap, easily available samurai swords" and not the more expensive swords sought by collectors and used by martial arts enthusiasts.

Carrying a samurai sword in public is already outlawed, punishable by up to four years in jail.