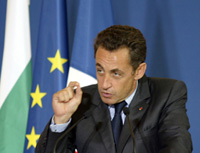 If "the Israelis consider their security is truly threatened" there’ll be a danger of the war erupting over Iran 's nuclear program, French President Nicolas Sarkozy said in an interview published Wednesday.

"I have never been for war," Sarkozy was quoted as saying. "The problem for us is not so much the risk that the Americans could launch a military intervention, but that the Israelis consider their security is truly threatened.

"The danger of a war exists," he was quoted as saying.

In a major report last week, U.S. intelligence agencies concluded that Tehran stopped developing its nuclear weapons program four years ago. Israeli Prime Minister Ehud Olmert insisted Tuesday that Iran is still pursuing nuclear arms and poses a major threat to the West and the world must stop it.

Israel has for years been warning that Iran is working on nuclear weapons, and it considers Iran a significant threat because of its nuclear ambitions, its long-range missile program and repeated calls by its president, Mahmoud Ahmadinejad, to wipe Israel off the map.

Olmert also said Tuesday that Israel would work with world bodies such as the International Atomic Energy Agency and would not take the lead in the struggle against Iran's nuclear program - an apparent attempt to counter speculation that Israel might feel the need to strike Iran militarily on its own, in the aftermath of the U.S. intelligence report.

Israeli leaders have never explicitly said they are considering an attack.

Iran claims its nuclear development is peaceful and that the goal is nuclear power.

In the interview, Sarkozy said, "Everyone agrees that what the Iranians are doing has no civilian explanation. The only debate is whether they will have military capability in one year or in five years."

Sarkozy said that if Iran allowed the International Atomic Energy Agency to carry out inspections, he "would be ready to come to Tehran and study the possibility of collaborating on civilian nuclear power."