Australia government said it may extend control over Aboriginal communities as the rapists of 10-year-old girl remained unpunished. 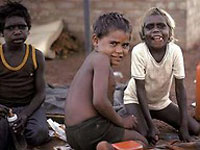 The case has sparked outrage nationally and fueled fears about the breakdown of society in the townships where many of Australia's original inhabitants live and that are riven by poverty, violence and alcohol and drug abuse.

Aboriginal Affairs Minister Jenny Macklin said she will consult the leader of Queensland state, where the rape occurred, about a federal operation in the Northern Territory to combat rampant child sex abuse.

Macklin told Australian Broadcasting Corp. radio she will meet with Premier Anna Bligh "to discuss the positive results that are coming out of the Northern Territory intervention and what issues might be useful to be implemented in Queensland."

The radical plan launched earlier this year in the Northern Territory came after an official investigation found child sex abuse was rife in Aboriginal communities because of neglect and the effects of what it called "rivers of grog" - or alcohol.

The report on the Northern Territory concluded similar problems were probably being repeated in remote communities across the country. But the federal response does not apply outside the territory, where the federal government has constitutional powers it does not have over the states.

Bligh, who has ordered a review of scores of sexual abuses cases in the Cape York region where the rape occurred to determine if different standards of justice were being applied for Aboriginal communities, said she was willing to cooperate with federal authorities.

"It would be premature to say this is systemic" before the review is completed, she said. "But if those cases show that it is, I won't hesitate to take very radical action if necessary."

Aborigines number about 400,000 among Australia's 21 million people and they are the poorest and most disadvantaged citizens, with a life expectancy 17 years shorter than any other group.

Their plight has rocketed back to public attention because of the abuse of the girl in the Cape York community of Aurukun and the sentences handed to the offenders.

Nine people who pleaded guilty to raping the girl in 2006 were paroled or had their sentences suspended by District Court Judge Sarah Bradley, who said the victim had probably consented to having sex with them.

Aboriginal leaders outraged at the leniency of the sentences demanded Bradley be removed from her post. Prime Minister Kevin Rudd said he was disgusted at reports of the case.

Bligh said the sentences will be appealed, and several welfare officials connected to the case have been suspended. Government prosecutor Steve Carter, who recommended Bradley hand down noncustodial sentences at the trial, has been stood down, Bligh said.

Bradley defended her ruling as "appropriate" because of Carter's recommendation.

In official court transcripts, Carter noted the girl could not legally have consulted to sex because of her age. But she had agreed to meet the offenders for the purpose of having sex, and for that reason no prison sentences were sought, Carter said.

Three of the rapists were juveniles, and Carter said their behavior could be considered "naughty."

"It was a form of childish experimentation, rather than one child being prevailed upon by another," Carter told the court in September.

The case comes as consultations opened on another sensitive topic - a planned apology to thousands of Aborigines who were taken from their families under now discredited assimilation policies that lasted for decades until the 1970s.

Macklin held her first meetings with indigenous leaders on Tuesday on the apology - and campaign promise of Rudd's for Nov. 24 elections. Many Australians oppose an official apology to the so-called "stolen generation," arguing it conveys guilt on this generation for mistakes made in the past.