A family of nine appeared in a New Zealand court for murdering a young woman during a Maori exorcism ceremony in October. 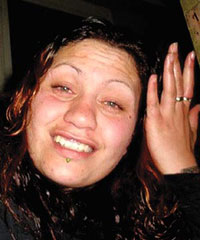 The six women and three men entered no pleas when they appeared in Lower Hutt District Court, and were released on police bail by Judge Denis Barry.

One of the women was charged jointly with a fourth man with cruelty to a child, a 14-year-old girl who also nearly died during the ceremony.

The judge granted all 10 defendants interim name suppression until they reappear in February.

The 10, aged between 42 and 57, were released on bail on condition that they not participate in or advise anyone over any ceremony involving Maori exorcism or cleansing procedures.

Police said the deceased drowned in a family bath during the ceremony at her grandparents' home on Oct. 12 while about 40 members of her family looked on.

Her 14-year-old cousin was taken to hospital after nearly dying during a subsequent exorcism - one of six other people subject to exorcism after the woman drowned, police said.

Earlier, police said the teenager nearly lost her sight after her eyes were gouged to drive out an evil spirit during the exorcism.

"The circumstances surrounding the death are unusual and the investigation has focused on those people primarily responsible," he told reporters at the court. "Everyone involved with the investigation is obviously very distraught," he said.

Levy said the 14-year-old girl's health was improving and "hopefully" she would suffer no long term damage.

Makutu, or Maori exorcism, is not widely practised by indigenous Maori though some use it to drive out what are believed to be curses and evil.