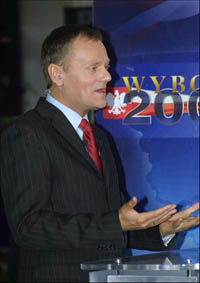 Poland, a staunch U.S. ally, contributed troops to the 2003 war in Iraq and still has some 900 personnel with an international force based in the southeastern province of Quadisiyah. That mission, which focuses on training Iraqi troops, is authorized until the end of 2007.

At its weekly session, Prime Minister Donald Tusk's Cabinet was to discuss formally asking the president - the armed forces' supreme commander - to extend the mission from Jan. 1 through Oct. 31, 2008, the government press office said.

Tusk, who took office last month, has said he wants to pull out troops from Iraq by next fall. He argues the government is the decision-making body on the issue and believes the plan will win support from Kaczynski - who has spoken in favor of keeping troops in Iraq longer.

It was not immediately clear when the president would make his decision, but it has to be this year.

Poland has lost 21 troops in Iraq.

Also on the agenda was approval for Tusk to sign the European Union reform treaty during Thursday's summit in Lisbon.

The Cabinet session was to be held late Tuesday, after Tusk returns from talks with German Chancellor Angela Merkel in Berlin.