Treating his numberless patients in a hospital in western Uganda without any special precautions Dr. Scott Myhre didn’t know what a great risk he took. 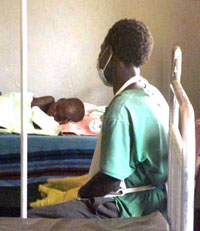 Only now does the American physician know the risk he took. The patients were suffering from a new strain of Ebola, a highly contagious disease that has already killed 22 people, including four health workers, among them a doctor Myhre counted as his best friend.

"I'm not in the clear yet but I'm hopeful," Myhre told The Associated Press by telephone from Bundibugyo Hospital, which is at the epicenter of the outbreak. Myhre, who has lived in Uganda for 14 years, must wait 21 days from his last unprotected contact with an Ebola patient to be declared clear of the disease.

For now, he is studiously following the recommended precautions: gowns, gloves, goggles, masks and boots.

Ebola typically kills most of those it strikes through massive blood loss, and has no cure or treatment. It is spread through direct contact with the blood or secretions of an infected person, or objects that have been contaminated with infected secretions.

On Friday, the Ministry of Health said there are 101 suspected cases of Ebola in Bundibugyo district and 22 deaths.

Doctors and nurses did not at first know what they were facing, so failed to protect themselves. Experts say the Ebola subtype that sparked the outbreak is new and the classic Ebola symptoms were not always present, slowing diagnosis. The outbreak began on Aug. 20, but the disease was not confirmed as Ebola until Nov. 29.

Since the confirmation, health workers have fled the job in Bundibugyo.

Hospital officials have been urging staff to return, to little avail. Meanwhile, the 100-bed hospital is trying to discharge all non-emergency patients and is operating very limited services.

"Many of the staff are not coming in but there aren't many patients either," said Myhre, who is from Vienna, Virginia. "The hospital is pretty much empty except for the isolation ward where the Ebola patients are being treated."

The ward houses 24 patients - some of whom are on mattresses on the floor - and is separated from the rest of the hospital by an orange mesh fence. Ebola is not airborne so the fence is designed to stop people wandering in accidentally.

Two teams including infection control doctors from the World Health Organization and the U.S. Centers for Disease Control and Prevention, recently arrived in Uganda to help local officials contain the outbreak. In previous Ebola outbreaks, the virus has often spread in health care centers where doctors and nurses are not properly protected.

Everyday operations at Bundibugyo Hospital are difficult at the best of times. The area - remote even by Ugandan standards - has no electricity. The hospital owns a powerful generator but the cost of fuel prohibits its use for more than a few hours daily. Solar panels provide lighting, and the wards have concrete floors and paint peeling off the walls.

Doctors attending Ebola patients are now being paid a daily risk allowance of US$23 ( EUR 15.70), while nurses and auxiliary staff are getting US$17 (about EUR 11) and US$12 (about EUR 8.20) respectively - up to twice what they normally receive.

"It is difficult to be with the patients sometimes, there is a lot of emotional pressure and a lot of hard work to be done," said David Kasumba, a nurse who has worked at the hospital for 12 years. "The patients are scared. We try to reassure them but it doesn't always work. They have seen what it can do."