A man sued Burger King restaurant because he found an unwrapped condom in the Southwestern Whopper. 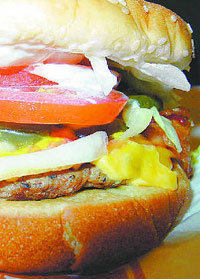 Van Miguel Hartless, 24, of Fair Haven, said Friday he bought the Southwestern Whopper at a Burger King in Rutland on June 18 and made the discovery when he got home and started eating it.

"My third bite into the burger, it was just a foreign taste," he said. "It was a very sour, bitter sort of taste. It almost had a numbing sensation.

"As I went to bite down a little harder, I felt a rubber grind in between my teeth. I saw it half in my mouth, half hanging out. It was an immediate sick-to-my-stomach type of thing."

Messages left with Carrols Corp. were not returned Friday. A spokeswoman for Burger King said it has referred the matter to Carrols Corp.

Similar claims have turned out to be fraudulent in other cases. A California couple was sentenced to nine years in prison in 2006 for planting a severed finger in a bowl of Wendy's chili in a scheme to extort money from the fast-food chain.

Hartless, a student at Green Mountain College , defended his claim.

A search of court filings in Rutland Superior Court - where Hartless' suit was filed - and the Civil Court in El Paso , Texas , where he lived before showed no prior or existing lawsuits, according to the Rutland Herald, which first reported the lawsuit Friday.

Hartless' lawyer, Devin McLaughlin, said he had Hartless undergo a lie detector test before the suit was filed, and that he passed "with flying colors."

Hartless said he has suffered from vomiting, nightmares and emotional distress. He said he also has incurred medical expenses, because he is worried about whether the condom had been used.

He said stored the sandwich and its original wrapper in a plastic bag in a freezer in his garage.