Eastern Ethiopia faces possible famine, Somalia is on the threshold of a severe humanitarian crisis, and Darfur's humanitarian situation is deteriorating. 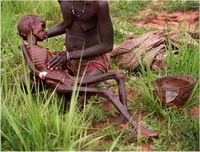 Undersecretary-General John Holmes painted a grim picture of conditions for millions of people uprooted by conflict in the three areas he just visited, saying their plight is "a reflection of the huge political and security challenges which this region now faces."

In the eastern Ethiopian region of Ogaden, where a low-level insurgency has escalated, there are fears "that already chronic food insecurity could give way to real famine conditions for a significant part of the 4.5 million population," Holmes told the U.N. Security Council.

"While there may not currently be a humanitarian catastrophe, there are strong reasons to believe such a catastrophe could occur in the next few months if all the necessary action to avert it is not taken," he said, warning that "a disaster could unfold with frightening speed."

Holmes cited limits on commercial traffic across the Somali border into the Ogadan, partly because of government concerns about arms smuggling, a poor rainy season, and difficulties in delivering food aid because of the insecurity and restricted access.

While the government believes claims of major humanitarian problems "are much exaggerated" and there should be no difficulties delivering food, Holmes said Ethiopia's Prime Minister Meles Zenawi "assured me that all necessary steps would be taken to avoid any famine."

In Somalia, he said, the U.N. estimates that more than half of the population of the capital, Mogadishu - or about 600,000 people - have fled an upsurge in violence and intimidation.

Holmes said some 230,000 of them are now living along a 15-kilometer (9-mile) stretch of road between the capital, Mogadishu,and the town of Afgooye, which probably constitutes the single largest gathering of displaced people in the world today.

He said he drove along the road where over 70 makeshift camps have mushroomed and told the council many people fled with only the clothes on their backs.

"I fear, on the basis of what I heard, that increasingly terrible things are now happening in Mogadishu, as it descends into the nightmare of urban guerrilla warfare and reciprocal atrocities," Holmes said.

He appealed for humanitarian organizations to step up their presence and said at least US$400 million (275 million EUR) will be needed in 2008, up from US$300 million (206 million EUR) this year, to help some 1.5 million people in need. But he stressed that "a robust humanitarian response cannot make up for the absence of desperately needed political and security progress."

Somalia has not had a functioning government since clan-based warlords toppled dictator Mohamed Siad Barre in 1991 and then turned on each other, sinking the poverty-stricken Horn of Africa nation into chaos. The weak U.N.-backed transitional government, with help from neighboring Ethiopia, has been battling a ferocious Islamic insurgency that has killed thousands of people this year.

In Darfur, Holmes said, some 13,300 relief workers are assisting 4.2 million people affected by the conflict, including 2.4 million displaced, "but the situation is gradually deteriorating, and the operation in many ways remains fragile."

"My serious concerns include restrictions on access, violence affecting civilians and aid workers, and respect of humanitarian principles by all parties to the conflict," he said.

Holmes said nearly 280,000 additional people were forced to flee the violence this year to already overflowing camps or to the bush, which has led to increasing malnutrition in several areas of Darfur.

In Adilla, in eastern Darfur, he added, one medical clinic reported 183 cases of sexually transmitted infections in September, including 40 cases in children under five years old.

"Continuing hostilities and the unpredictable security situation are the greatest obstacles to access," Holmes said. "But there is also justified concern over the refusal of national authorities to allow access in certain areas, for example, Adilla and Jebel Marra, where there are tens of thousands of civilians in severe need."

Since the beginning of the year, Holmes said, 128 vehicles were, 118 staffers were temporarily taken hostage, 59 workers were physically or sexually assaulted, 74 convoys were ambushed and looted and 12 relief workers were killed.

"In other words, those who have come just to help continue to be attacked, in an atmosphere of near total impunity," he said.