The dome of St. Peter's Basilica finally got a long-missing Michelangelo sketch. 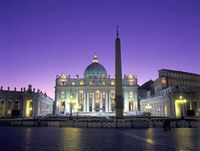 The sketch, drawn in blood-red chalk for stonecutters who were working on the construction of the basilica, was done by the Renaissance artist in 1563, in the year before his death, L'Osservatore Romano reported.

"The sureness in his stroke, the expert hand used to making decisions in front of unfinished stone, leave little doubt, the sketch is Michelangelo's," the newspaper wrote about the discovery, which it said will be presented at a news conference at the Vatican on Monday.

Michelangelo, who began working on the basilica's construction in 1547, was in his late 80s when he did the sketch. The sketch is especially rare, the Vatican newspaper noted, because the artist ordered many of his designs destroyed when he was an old man.

The sketch was discovered in the Fabbrica of St. Peter's, which contains the basilica's offices.

L'Osservatore Roman said most sketches done by Michelangelo for the stonecutters were destroyed or lost in the cutters' workplaces, but this one survived because a Fabbrica supervisor, possibly on the stonecutters' premises, used the back side of the sketch to make notes about problems linked to the stone's transport through the outskirts of Rome.

Assistance in the research for the sketch came from the University of Bonn and Rome's Bibliotheca Hertziana.