Saudi Prince Bandar bin Sultan has sold a smaller house for a comparatively modest $36.5 million (25.08 million EUR) - a record price for a single-family home in Aspen. 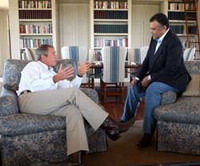 Bandar's Aspen attorney, William Jordan III, said the prince and his family had decided to keep Hala Ranch. Real estate broker Joshua Saslove said no one had made an offer that was acceptable to Bandar.

The smaller home had not been listed on the market.

"Somebody came along who appreciated the property and since (Bandar) decided to keep the ranch, he decided to sell this," Jordan said.

Bandar served as ambassador to the United States from 1983 to 2005. He is now head of Saudi Arabia's National Security Council.