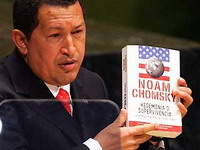 Marisabel Rodriguez said she believes terms should be reduced from six to four years, and allow presidents only one opportunity for re-election.

"Four years and re-election ... it gives you enough time," said Rodriguez. "This can be done through an amendment."

Her comments came four days after voters narrowly rejected the president's 69 proposed changes to Venezuela's Constitution, including reforms that would have let him run for re-election indefinitely.

Chavez and Rodriguez divorced in 2004 and have one daughter, 10-year-old Rosines. Chavez, a former paratroop commander who first took office in 1999, also has three children from a previous marriage.

Chavez - a close ally of Cuban leader Fidel Castro - dismissed his opponents' win as insignificant on Wednesday, using a derogatory term for feces.

"He's been using that language for some time. I think it's a lack of respect for Venezuelans," Rodriguez said.

Rodriguez drew attention ahead of Sunday's referendum by breaking years of silence and strongly criticizing her ex-husband, accusing him of becoming obsessed with power, putting politics above the population's well-being and failing to fight corruption.