Xinhua News Agency did not give details, but said Hu reiterated "China's persistent stand to peacefully solve the (Iranian) nuclear issue through diplomatic negotiation, so as to protect regional peace and stability, which will meet the interests of all the parties concerned." 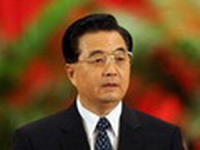 The discussion on Iran comes after a U.S. intelligence review released earlier this week concluded that Iran stopped developing a nuclear weapons program in 2003.

The U.S. National Intelligence Estimate report is a reversal of Washington's intelligence claims that Tehran was actively seeking a weapon and could undermine attempts by the Bush administration to win further U.N. sanctions against Iran.

A top U.S. diplomat said Monday, before the report was released, that Beijing may be open to discussing new sanctions against Iran.

In talks hosted by Beijing, North Korea has agreed to dismantle and fully account for its nuclear activities by the end of the year, although U.S. officials acknowledged Thursday that the deadline is likely to slip.

The telephone conversation also comes ahead of economic talks between the countries next week just outside Beijing.

A focal point will be China's huge trade surplus, which has caused frustrated U.S. lawmakers to start drafting punitive measures if nothing is done to improve the imbalance.

Few major deals are expected at meeting, although officials are planning to sign agreements on helping Chinese exports of food, drugs and medical devices meet U.S. quality and safety standards, in response to a spate of recalls of a variety of Chinese exports, from toys to tires.

In Washington, Gordon Johndroe, a Bush spokesman, confirmed Bush and Hu spoke on "a number of issues" and that Bush was looking forward to working with Hu. Johndroe declined to discuss the details of their conversation.