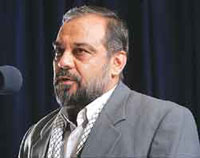 An Iranian Revolutionary Guard general has resigned from his post after being banned from traveling abroad by U.N. Security Council sanctions, local news agency said Thursday.

The report by the semiofficial Mehr news agency did not elaborate on the reasons behind Gen. Mohammad Baqer Zolqadr's resignation from his job as deputy interior minister in charge of security affairs, saying only that Interior Minister Mostafa Pourmohammadi accepted his resignation.

Mehr said the move had no connection to a recent decision by President Mahmoud Ahmadinejad replace education minister, Mahmoud Farshidi, the fifth such cabinet change since 2005.

Zolqadr was one of 15 Iranians listed in U.N. Security Council Resolution 1747 of March 24 punishing Iran for failing to stop its enrichment of uranium - a process that can produce the material for nuclear bombs.

The United States and some of its allies fear that Iran is using its nuclear program as a cover to produce weapons. Iran denies the charge, saying it only seeks to generate electricity.

Tehran has vowed it will never give up its right under the Nuclear Nonproliferation Treaty to enrich uranium, saying it wants to produce nuclear fuel.

A recent U.S. intelligence estimate stated that Iran had abandoned its search for nuclear weapons in 2003.