Putin to meet with Belarus' president next week 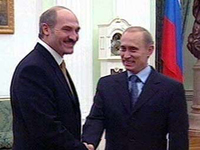 Putin to meet with Belarus' president next week

The future of the Russian-Belarusian alliance is to be the main issue for the next week’s meeting of President Vladimir Putin and President Alexander Lukashenko, officials said Thursday.

Russia's President Vladimir Putin and his Belarusian counterpart, Alexander Lukashenko, were planning to consider a draft constitution for a Russia-Belarus union at their Dec. 13-14 meeting in the Belarusian capital, Lukashenko's office said.

Russia and Belarus signed a union agreement in 1996 which envisaged close political, economic and military ties and eventual full merger.

The authoritarian Lukashenko pushed strongly for creation of a single state in an apparent hope of taking its helm at the time when Russia was led by ailing President Boris Yeltsin, but his ambitions were shattered with Putin's election in 2000.

Lukashenko's relations with Putin were often tense. In 2002, he angrily rejected a Kremlin proposal to fully merge the two nations by incorporating Belarus into the Russian Federation - a plan that would effectively have left him without job.

Russia's move this year to hike energy prices for Belarus has added to the strain and angered Lukashenko, who earlier this year denounced Russia as a "huge monster."

Despite the acrimony, Lukashenko, who has become a pariah in the West for his relentless crackdown on opposition and the free media, needs Russia's political support and the Soviet-style Belarusian economy remains fully dependent on Russian energy supplies.