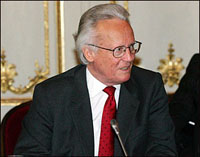 A deputy U.N. special envoy said that Kosovo’s independence was unavoidable and its statehood was the only one good solution for the problematic situation.

"Nobody can prevent the independence of Kosovo," Austrian diplomat Albert Rohan, deputy to special envoy Martti Ahtisaari, told the daily Die Presse in an interview to be published Friday.

Rohan said a plan drafted earlier this year by Ahtisaari - which had recommended internationally supervised independence - was the best compromise, and he warned that further delays could "dangerously destabilize" the Balkans.

"Whoever causes that must take responsibility," the newspaper quoted Rohan as saying. "Every voice in the European Union that speaks out in favor of unrealistic options or delaying a decision strengthens Serbia's resistance and Russia's position."

The Ahtisaari plan collapsed earlier this year after Russia, an ally of Serbia, threatened to veto it at the U.N. Security Council.

The stalemate over the Ahtisaari plan led to four months of internationally mediated negotiations that ended last week with the rival sides still deadlocked.

A "troika" of envoys from the U.S., EU and Russia must report back to U.N. Secretary-General Ban Ki-moon by Dec. 10.

Although formally a part of Serbia, Kosovo has been under U.N. and NATO administration since 1999, when NATO airstrikes ended former Yugoslav President Slobodan Milosevic's crackdown on ethnic Albanian separatists.

At a luncheon Wednesday with editors of The Associated Press in New York, Ban said he would look to the Security Council for guidance because the troika report "is highly likely to say (the rival sides) have not been able to agree."

Kosovo's leaders have vowed to declare independence unilaterally - possibly early in 2008 - if the U.N. does not sign off on statehood.

Rohan said he doubted that a unilateral independence declaration would come before year's end.

He said Kosovo's leaders first would have to ensure that the vast majority of EU member states would recognize it before it proclaims statehood. Kosovo officials have pledged to coordinate any move with the U.S. and the EU, and a declaration before Serbia's presidential elections - tentatively scheduled for Jan. 20 - appeared unlikely.

Although many EU nations have said they would do so, the holdouts include Slovakia, Spain, Greece, Cyprus and Romania, which fear a unilateral independence declaration would set a dangerous precedent for separatist movements worldwide.

"But I still believe that Kosovo will become independent in the first quarter of next year," Rohan said.