The air smells sweet when you pass between the columns saying "Welcome Cassadaga Spiritualist Camp." 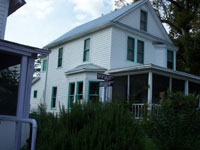 The smells come from the small houses that line the narrow streets, the porches decorated with chimes and ornaments. The paint peels from many homes and some of the yards are unkempt and cluttered.

The spooky atmosphere is appropriate - the Spiritualists who live here say they converse with the dead, that such communication is a scientific fact. A sign outside the 57-acre (23-hectare) camp's bookstore says the town's 30 or so mediums and healers are certified authentic, although none appear willing to be tested by outsiders - even for $1 million ( EUR 680,000).

Founded 113 years ago as a winter retreat for the believers in the once-popular religion Spiritualism, Cassadaga attracted educated and affluent people who would live in tents or hotels until cottages were built. Those days are long gone, but busloads of tourists still come to this national historic district 35 miles (56 kilometers) north of Orlando and pay for answers about life after death.

"They are coming to confront their own mortality," said Victor Vogenitz, a self-proclaimed physical phenomenon medium and healer. "We've got a wave of people who are looking for answers."

Cassadaga has a hotel and a U.S. Post Office, and offers historic tours and "healing services" to visitors each week. The main seance room is in the Colby Memorial Temple and the camp, which is a federal tax-exempt church governed by of board of trustees, has administrative offices nearby.

But people can't just show up and claim to be a medium - they have to get certified, follow a syllabus and publicly demonstrate their ability to talk to the dead, Vogenitz said. All this can take four to 10 years of study.

And it can be a lonely life, the Spiritualists say.

"My family doesn't know where I live. They think I am strange," said June Schmitt, an elderly medium who won't divulge her age. Her eyes fill with tears. "Nobody has been to see me. Sometimes it upsets me."

"Our families always thought we were weird," said Esther Seymour-Vogenitz, Victor's wife. "The people that are attracted to us are the open-minded people."

Vogenitz does his readings in a small cream-colored stucco house with a tin roof, the sign in front proclaiming "I believe in ghosts." And for good reason, apparently. He says the ghost of a little girl named Sarah lives in the home, playing with his guests' blond hair. He has bought Sarah several dolls, a jump rope and some markers to play with, which he keeps in his seance room.

"I'd step into the house and she would step back into the wall," Vogenitz said. He differentiates between ghosts and spirits. A ghost is a three-dimensional hologram, while a spirit is made of energy and is a surviving consciousness, he said.

When a spirit is present it will take energy from anything around it including cell phones, cameras and even out of the air, he said.

Seances are Vogenitz's specialty - he charges $45 ( EUR 31) for a half-hour reading and $45 ( EUR 31) per person for a two-hour seance. In the main temple under a dull, red light, Vogenitz said he has reached a spirit who had acid reflux before he died. The wooden table spins toward one of the participants and Vogenitz said the table was "hugging" the person. He talks to it as if the spirit inhabits it. The participant confirms his father had acid reflux shortly before he died.

After the seance, the light is turned back on and Vogenitz pushes and picks up one side of the table to show he couldn't have moved it.

Balderdash, says James Randi, a Fort Lauderdale magician and professional debunker. "It's very convenient that they have a whole town to themselves and ... it's the only business in town," he said. Nor is he surprised that the mediums have many satisfied customers: "The average naive believer not only wants it to be true, but needs it to be true."

Randi said there are 15 different ways to move a table during a seance, starting with the red light, which blurs the eye's focus. The table can be rigged from the ceiling or the floor, he said. In some cases, the table is simply being pushed by the medium's feet.

"I have seen these all over the world. They are all the same thing," Randi said. He said mediums are nothing more than performers. "They don't tap dance, they don't juggle ... so they do this."

Randi is guardian of a $1 million ( EUR 680,000) prize earmarked for anyone who can prove supernatural powers. He said many hundreds have tried over the years, but the results are always negative.

"Spiritualists are not willing to be tested. They say it's the work of God and is not supposed to be tested. I require evidence," he said.

Vogenitz said the conditions Randi sets are too high. Besides, Vogenitz says, he doesn't do it for the money, but to help people.

"In Spiritualism we believe we will be taken care of," Vogenitz said.

And there are believers, willing to pay. Some came to the recent Cassadaga Fall Festival, which featured mini-readings and aura readings.

Lauren Taylor, 13, of Melbourne said her medium was "amazing." The woman told Lauren she would be going on a trip. Lauren says she is planning one for next June.

"She knew my hobbies," the middle schooler said. "She knew I was romantic."

Medium Georgie Kern told Vidal Fonseca that he has a good future, but he has had to struggle for it.

Kern, who has been at the camp 10 years, added that Fonseca's mother should get some vitamins or supplements into her diet.

Michael Shermer, the publisher of Skeptic magazine and executive director of the Skeptics Society, said psychics and Spiritualists don't have any real powers, although some may sincerely believe they do.

Instead, they are picking up clues from the person they are reading and getting information through the answers they receive to general questions, he said. As far as talking to those who have died, Shermer isn't impressed.

"Anyone can talk to the dead. It's getting the dead to talk back that's the hard part," Shermer said.