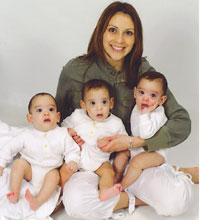 Pamela Kocke's boys made their appearance early Tuesday, while Alisha Murphy's girls began showing up about 12 hours later, according to a hospital news release. All were doing well Wednesday.

"The trips were natural," hospital spokeswoman Katherine Voss said. The odds of naturally born triplets are about one in 8,000.

The boys weigh from 4 pounds, 2 Ѕ ounces to 4 pounds, 10 ounces. Doctors won't know whether any of them are identical until they get lab results from the babies' placentas, Voss said.

An ultrasound early during the pregnancy found that two of the girls are identical twins, indicating one of three fertilized eggs split after it was implanted, said Murphy's obstetrician, Dr. Sherri Longo. She didn't know which two are identical.

The girls were delivered at 32 weeks, weighing from 3 pounds, 6 ounces to 4 pounds, 3 ounces. The average gestation for quadruplets is 29 Ѕ weeks.

All the infants will stay in the neonatal intensive care unit for a few weeks - standard for premature babies.