Both Kanye West and Amy Winehouse had a bad year. His mother passed away this year and Amy had health problems that forced her to cancel some of her shows. 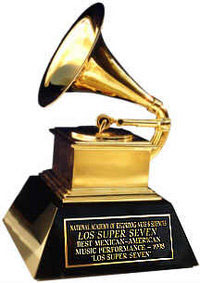 But both artists' year may end up on a happier note at Thursday's Grammy nominations, with industry insiders predicting the two were likely to garner multiple nods.

Grammy-nominated producer Sean Garrett said West was a sure bet. The rapper's third album, "Graduation," had the year's biggest debut, selling nearly 1 million copies in its first week, an amazing feat during the industry's current struggles.

Winehouse, though dogged with rumors of substance abuse, made a serious impact this year with her album "Back to Black" and its big hit, "Rehab."

"I don't think her troubles are really going to hurt her," Grammy-winning producer John Shanks predicted.

Beyonce was also likely to feel Grammy love, Garrett said. "Irreplaceable," one of the most ubiquitous songs of 2007, is a heavy favorite. It could earn nominations for record and song of the year, as well as for best female pop vocal.

"She works really hard and I think at some point you've really got to give it up for her," Garrett said. "She's been doing it a long time and she's still at the top of her game."

Akon, who was slated to help the Recording Academy announce its nominees for the 50th annual Grammy Awards on Thursday morning, was likely to hear his name among the honorees.

The 34-year-old hip-hop star was named favorite male soul/rhythm & blues artist at last month's American Music Awards. He also has had a difficult year: Akon pleaded not guilty Tuesday to criminal charges filed after he allegedly tossed a 15-year-old boy off the stage at a concert earlier this year.

Other candidates for Grammy attention included Chris Daughtry's eponymous band Daughtry, which had multi-platinum success with its self-titled album, and Fergie of the Black Eyed Peas, whose solo album "The Dutchess" generated several big hits.

"Fergie did a really, really good job," said Garrett, who produced her hit song " London Bridge ." "She had an incredible album. It's still getting played and still selling like 35,000 copies a week."

Rihanna also was a possible nominee for "Umbrella," another ubiquitous song of 2007. "To me 'Umbrella' is the song of the year," said Shanks.

In the best new artist category, 18-year-old country sensation Taylor Swift was a likely nominee, while Winehouse was almost a sure thing.

"She's on the tip of people's tongues," Shirley Halperin, senior music writer for Entertainment Weekly, said of the British soul singer. "She has universal appeal."