US shuttle Atlantis poised for liftoff

Shuttle Atlantis was prepared for takeoff with seven members of crew and a space station lab on board. 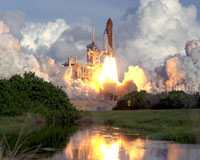 US shuttle Atlantis poised for liftoff

Near perfect weather was forecast for the late afternoon launch, giving NASA hope that this could be its fourth on-time takeoff this year. Each of the year's previous shuttle countdowns ended with an on-the-dot departure.

About 750 Europeans connected to the scientific laboratory - a $2 billion ( EUR 1.4 billion) project begun nearly a quarter-century ago - were in town for the launch and expected to gather at the space center.

Columbus is "our cornerstone, our baby, our module, our laboratory," said Alan Thirkettle, the European Space Agency's station program manager.

Columbus will be the second laboratory added to the space station. NASA's Destiny lab made its debut in 2001, and Japan's huge lab Kibo, which means hope, will go up in three sections beginning on the very next shuttle mission in February.

Scientific work will start almost immediately inside Columbus, which is essentially packaged all ready to go.

Thirkettle sees Columbus as a stepping stone for Europe to the U.S.-led moon expeditions planned for late in the next decade. To gear up for that, NASA is under presidential orders to finish the space station and retire its three remaining shuttles in 2010.

Counting Atlantis' upcoming flight, that leaves 12 shuttle missions to the space station and one, next summer, to the Hubble Space Telescope.

NASA Administrator Michael Griffin said he does not expect that number to change, which means some space station equipment and experiments will never make it up.

Aside from the interruption caused by the 2003 Columbia tragedy, the actual building of the space station in orbit has gone well, Griffin said. That is in stark contrast to the space station's planning and development, which dragged on for years and contributed to Columbus ' prolonged grounding.

"We the United States , as the senior partner in the space station coalition, did not plan it well," Griffin said on the eve of Columbus ' launch. "It has taken far too long and I'll just leave it at that."