4-year-old hostage returned to his family in Colombia

A female rebel left Colombia's largest rebel army to return a 4-year-old hostage to his family. 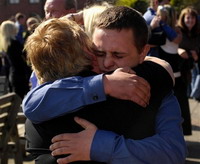 4-year-old hostage returned to his family in Colombia

The guerrilla hiked through the jungle with Brian Rincon Arias in her arms to reach a military base in the northeast border town of Arauquita on Tuesday, Gen. Jose Joaquin Cortes, head of the army's second division, told local media.

The child was kidnapped in June from a nursery school in the city of Cucuta and was placed in the care of the female guerrilla, who was identified only by her nickname, "La Negra."

The Revolutionary Armed Forces of Colombia, or FARC, was demanding a US$250,000 (169,000 EUR) ransom for the child's release, the daily newspaper El Tiempo reported.

The child appears to have formed a strong bond with his former captor: images broadcast by RCN network showed the boy grabbing for her hand and hugging her minutes before she was reunited with his parents.

"Thank God he was well looked after, because he looks nice and chubby," said the boy's father, whose face was electronically obscured, in an interview broadcast by RCN.

The guerrilla, who did not speak to reporters and appeared only with her back to cameras, will now enter a government-run program for the more than 12,000 guerrillas who have deserted rebel ranks in the past five years.

A U.S.-backed counter-guerrilla offensive has pushed the FARC farther into the countryside and led to the desertion of 2,707 rebels through the first 11 months - up 47 percent from desertions during the same period in 2006.

The FARC relies on ransom kidnapping and proceeds from the cocaine trade to finance its half-century old insurgency.