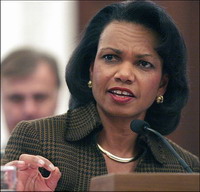 Rice was in the Ethiopian capital, where the African Union is headquartered, to meet with African leaders after expressing growing unease about a number of deteriorating security and faltering peace deals.

Rice had said she wanted tackle elements of the Darfur conflict and try to bolster the 2005 peace deal that ended a separate, long-running north-south civil war. But Sudanese President Omar al-Bashir's government skipped the meeting, although Rice went on to meet southern Sudanese leaders, according to a list of delegates released by the U.S. Embassy.

In Khartoum, Sudan, a ruling party official said the government, from which southern officials recently withdrew, had skipped the talks because it did not want Rice to intervene in the north-south dispute. He spoke on condition of anonymity because of the sensitivity of the issue.

The Sudanese government's official explanation was that it had received invitations "only a few days ago," not leaving senior officials time to rearrange schedules.

"Our absence is not a sign of defiance," Ali Sadiq, the spokesman for Sudan's foreign ministry, said in Sudan's capital. "If they (the U.S.) had told us earlier, we would have come."

Washington-Khartoum relations have been strained, with American leaders accusing the government of atrocities in Darfur and Khartoum bristling at Western pressure to allow international peacekeepers in Darfur. But Washington also sees Khartoum as an ally in the war on terror.

Earlier, Rice said she wanted to focus on overcoming logistical hurdles holding up a joint U.N.-African Union peacekeeping force for Darfur, a vast region ravished by years of conflict.

More than 200,000 people have died and 2.5 million have been displaced since February 2003 when Darfur's ethnic African rebels took up arms against the Arab-dominated central government, accusing it of neglect.

As for the 2005 peace deal between al-Bashir's government and southern rebels, she said "it's time to refocus our efforts there."

"That is really an agreement that we cannot afford to let unravel," Rice said.

There are currently about 1,800 Ugandan peacekeepers in Somalia, officially as the vanguard of a larger African Union peacekeeping force, though so far no other countries have sent reinforcements. Ethiopia, which sent soldiers to Somalia late last year to wipe out Islamic militants, is not part of the peacekeeping force and is hoping to withdraw.

"We do believe the Ethiopian forces should not have to stay in Somalia past a certain point, and that will require peacekeeping forces, very robust peacekeeping force," Rice said. The United Nations has said Somalia is facing the worst humanitarian crisis in Africa.

Peacekeepers have tried to pacify Somalia before, with tragic results. More than a decade ago, a massive U.N. relief operation was launched for thousands of civilians left starving because of fighting in Somalia. But 1993 attacks by Somali militiamen that brought down two Black Hawk helicopters and killed 18 U.S. servicemen were followed by the withdrawal of U.S. troops and the eventual end of the U.N. peacekeeping operation.

"It put on the top of the agenda those burning problems that now need to be solved, that need to be addressed and one of these is the improvement of the security environment," he said.

Hussein, the former head of the Somali Red Crescent Society, is new in office and not believed to have the influence over clans, and therefore the political influence, of the president. The government as a whole is struggling to assert authority.

Five ministers in the Somali government resigned this week, soon after the Cabinet was named, to protest their clans' representation.

"The Somali leadership is going to have to really reach out to all the elements that are not associated with terrorism," Rice said. "It has to be broad and that's really my message to the prime minister. He has to find a way to broaden his base of support."

Last year, a radical Islamic movement accused of links with al-Qaida seized control of much of the southern part of Somalia, prompting Ethiopia to invade in December 2006 with Washington's tacit backing. The Islamic movement was toppled, but its supporters have waged an Iraq-style insurgency. A Somali human rights groups said over the weekend that nearly 6,000 civilians have been killed in the crossfire this year.

Elsewhere, Rice said dealing with rebels in eastern Congo is critical to re-establishing normalcy in a region that has been devastated by decades of war and genocide that have killed millions.

Fighters following a renegade Congolese generalhave clashed with government forces who are backed by the U.N. The violence has displaced tens of thousands of villagers in recent weeks, straining humanitarian resources in Congo as well as neighboring Uganda. There are also concerns that Rwanda and other neighbors could be drawn into Congo, as they have in the past.

Rice was scheduled to talk with Ethiopian Prime Minister Meles Zenawi, a U.S. counterterrorism ally criticized for a crackdown on political opponents and whose country shares a tense border with arch-foe Eritrea.

"We don't need a use of force here to deal with what is obviously a significant border problem," Rice told reporters aboard her plane en route to Addis Ababa, referring to a feared resumption of the 1998-2000 Ethiopian-Eritrean war that killed tens of thousands of people.