28-year-old mother under suspicion of killing her three babies

The first corpse was found Nov. 27 after authorities asked why the child, born in a clinic in 2002, had not yet been brought for a required checkup before starting school. The body of the baby girl was found wrapped in plastic and hidden in a suitcase in a storage area of a relative's home. 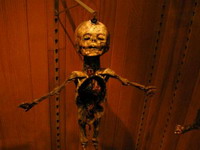 28-year-old mother under suspicion of killing her three babies

Two other corpses of baby girls were found Tuesday in the woman's home in Plauen, a city near the eastern border with the Czech Republic, Saxony state police official Dieter Kroll said.

They had been born in the woman's home, Kroll said, without saying when. He said both were also found wrapped in plastic - one in the freezer and the other on her balcony.

The woman, who was not identified by name, was taken into custody. Her two living children - a baby and a child in grade school - were taken into protective custody, Kroll said.

The woman has denied killing the three children babies.

Police began investigating after the girl who was born Feb. 28, 2002, never showed for a medical checkup before attending school, as she would have been old enough to do this year. Though the mother never registered the child, the hospital where the child was born did - leading her to be listed by the state as expected for the clinic visit.

The story was a haunting reminder of another case of a woman in eastern Germany who was convicted of manslaughter after being found guilty of killing eight of her babies.

In 2006, Sabine Hilschenz, 40, was given the maximum sentence of 15 years after being found guilty of eight counts of manslaughter. She was also suspected in the death of ninth child in 1988, but the statute of limitations did not allow for that case to be tried. The other eight babies were born between 1992 and 1998.

Hilschenz was arrested after the remains of the infants were found, buried in flower pots and a fish tank in the garden of her parents' home near the German-Polish border.