This city's Police Department will have chaplain badges without crosses from now on to settle a lawsuit filed by a Lutheran pastor-turned-atheist. 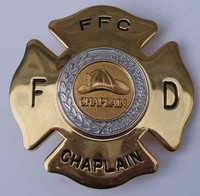 "It's a milestone," said Ray Ideus, 75, who volunteers eight hours a week for the department and filed the lawsuit in 2006.

"It's very important that they'll have to take that cross off. It's not a Christian police department. The chaplains have to minister to all faiths and non-faiths."

His lawsuit said putting the cross on police chaplain badges is an "impermissible incorporation of a particular religious symbol in a government insignia."

Ideus was a Lutheran pastor for 30 years before he became an atheist. His volunteer duties do not include work as a chaplain.

Ideus was countersued by Assistant City Attorney Rocco N. "Rocky" Treppiedi, who claimed the lawsuit was "false, and unfounded, malicious and without probable cause." That countersuit was dismissed under the settlement.