An international aid organization reported that Angolan soldiers were systematically raping Congolese women who had crossed the border illegally in search of work in the diamond fields. 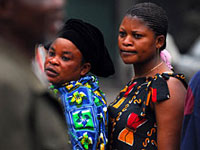 Medecins Sans Frontieres said in two weeks in October, one of their teams saw 200 rape victims at their clinic in Western Kasai - a Congolese province bordering Angola.

"We are extremely angry about the situation and we are calling on the Angolan government to make this stop," said Meinie Nicolai, director of operations for the aid organization also known as Doctors Without Borders.

Testimonies of multiple rapes and physical abuse perpetrated by the Angolan military were presented at a press conference.

A 34-year-old victim whose testimony was presented said: "I think rape is their weapon to prevent people from coming back."

"The men who are able to, run away, while those who cannot are locked up in a filthy makeshift prison with the women and children," she said. "Women are systematically raped by several soldiers, some of them in front of their children. This abhorrent practice is repeated over several days as they are transported to the border."

Several testimonies spoke of death due to exhaustion or mistreatment. Men have been beaten, forced to work or to join the army, or even executed, the organization said. Testimonies described people being deprived of water and food during detention, and intrusive body searches for diamonds.

Nicolai said Angolan ambassadors in Congo and Europe had been approached but they had not had a "receptive" response.

The Angolan ambassador in Congo, Joao Batista Mawete, refused comment when contacted by The Associated Press Wednesday, and said he had also refused to speak to Medecins Sans Frontieres.

According to the United Nations, about 400,000 Congolese live in diamond rich northern Angola and 44,000 have been expelled since January.

Nicolai said Congo had been devastated by years of war and there was little functioning infrastructure, "so people look for other opportunities to find some money."

Nicolai said her organization intervened in 2004 when there were similar reports of rape and abuse but now there was an increase in the number of expulsions and incidents of sexual violence by Angolan forces.

One 44-year-old woman living alone with her five children was raped multiple times on four occasions.

"For three days, I was raped by a soldier, who after he raped me told me he would protect me. All the women were raped. I think about 250 women," she said in testimony presented by Medecins Sans Frontieres.