An international environmental group sent a petition to Lech Kaczynski, the President of Poland, asking to take measures to stop the logging of centuries-old trees in primeval Bialowieza forest. 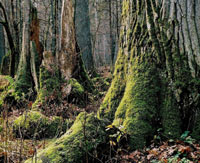 Last year alone, a large number of trees were cut in Bialowieza, including "some 1000 large spruces and two 160-year-old maples," according to a report by World Wildlife Fund.

Polish WWF members handed a petition with 100,000 signatures to a presidential aide, demanding that "logging be stopped" in Bialowieza forest and that all of the pristine woodland on Poland's territory be legally protected as a national park. As of now, only 17 percent of the area in eastern Poland is under such protection.

The petition, which was also sent to Prime Minister Donald Tusk, says the forest is "the last natural lowland mixed forest in Europe" whose "priceless, natural and cultural values perish irretrievably."

"We hope that both the president and the prime minister will cooperate to find the best solution for Bialowieza forest," said Anna Piekut from WWF.