A Roman Catholic bishop protests against a river diversion project. He claimed that he had rejected calls from church leaders to end his hunger strike. 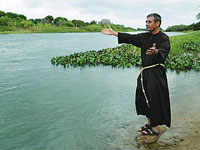 "I felt strengthened by their presence and I feel they care a lot about me and don't want me dead," Cappio said by telephone from the northeastern city of Sobradinho. "They fear for my life, but they support my cause."

Cappio said he was prepared to die if the government does not stop work on a US$2 billion (€1.4 billion) project to divert the Sao Francisco river, the nation's fourth largest, as part of plan to irrigate the country's arid northeast.

The government estimates the plan will benefit about 12 million people in the desperately poor region. Cappio and other critics say the project will cause irreversible environmental damage and principally benefit large agribusiness interests and builders.

Following the meeting, Magela said his group understood Cappio's cause but disagreed with the way he had chosen to protest.

"The decision is up to his conscience," Magela told reporters. "But we showed him that it is important that he remains alive and healthy."

In 2005, Cappio ended a similar hunger strike after 11 days when the government promised to hold public debates on the project. He now accuses the government of failing to honor its promise.

Since he began the hunger strike on Nov. 27, Cappio said he has lost about 3 kilograms (6.6 pounds). He continues to drink water and doctors said he was still in good health.

"I would rather be on the side of 12 million people than on Luiz Cappio's side," he told reporters.