Two women were raped by football players and recruits of the University of Colorado. The University agreed to pay $2.85 million (€1.94 million) to settle a lawsuit. 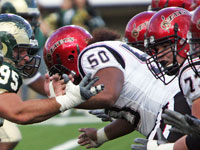 The women said they were attacked at an off-campus party for football players and recruits in 2001, and alleged that the university violated federal law by fostering an environment that allowed sexual assaults to occur. The lawsuit sparked a scandal over CU's football recruiting practices that led to broad reforms and a shake-up of the university's top leaders.

University spokesman Ken McConnellogue said Wednesday that the school agreed to hire an adviser to monitor compliance with federal laws governing equal treatment of women and add a position in the university Office of Victim Assistance.

Baine Kerr, attorney for one of the women, did not immediately return a call seeking comment.

A federal judge dismissed the suit in 2005, saying the women failed to show evidence of deliberate indifference, but in September the 10th U.S. Circuit Court of Appeals revived the lawsuit, ruling there was evidence the alleged assaults were caused by the school's failure to adequately supervise players.

The recruiting scandal prompted a grand jury investigation, which resulted in a single indictment charging a former football recruiting aide with soliciting a prostitute and misuse of a school cell phone. He pleaded guilty and was placed on probation.

A separate inquiry, backed by the university's Board of Regents, concluded that drugs, alcohol and sex were used to entice blue chip recruits to the Boulder campus but said none of the activity was knowingly sanctioned by university officials.

The school responded by overhauling oversight of the athletics department and putting some of the most stringent policies in place for any football recruiting program. The fallout included the resignations of CU System President Betsy Hoffman and Athletic Director Dick Tharp.