Over 200 of the leading climate scientists impelled government leaders to take radical measures to slow down global warming as "there is no time to lose." 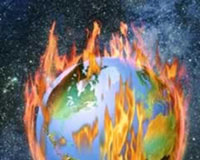 A petition from at least 215 climate scientists calls for the world to cut in half greenhouse gas emissions by 2050. It is directed at a conference of diplomats meeting in Bali, Indonesia, to negotiate the next global warming treaty. The petition, obtained by The Associated Press, is to be announced at a press conference there Wednesday night.

The appeal from scientists follows a petition last week from more than 150 global business leaders also demanding the 50 percent cut in greenhouse gases. That is the estimate that scientists calculate would hold future global warming to a little more than a 3-degree Fahrenheit increase and is in line with what the European Union has adopted.

In the past, many of these scientists have avoided calls for action, leaving that to environmental advocacy groups. That dispassionate stance was taken during the release this year of four separate reports by the Nobel Prize-winning Intergovernmental Panel on Climate Change.

"It's a grave crisis, and we need to do something real fast," said petition signer Jeff Severinghaus, a geosciences professor at the Scripps Institution of Oceanography in La Jolla, California. "I think the stakes are way way too high to be playing around."

The unprecedented petition includes scientists from more than 25 countries and shows that "the climate science community is essentially fed up," said signer Andrew Weaver of the University of Victoria in Canada. It includes many co-authors of the intergovernmental climate change panel reports, directors of major American and European climate science research institutions, a Nobel winner for atmospheric chemistry and a winner of a MacArthur "genius" award.

"A lot of us scientists think the problem needs a lot more serious attention than it's getting and the remedies have to be a lot more radical," said Richard Seager, a scientist at Columbia University's Lamont-Doherty Earth Observatory.

The organizers of the petition two Australians, two Germans and an American would not comment about their efforts before their 11 p.m. EST (0400 GMT) press conference. But several scientists who signed on talked of losing patience.

Negotiators in Bali are working on the initial groundwork for a treaty that would take effect after 2012, the expiration date of the Kyoto Protocol, a climate treaty the United States did not sign. However, no one expects concrete results at the closed-door sessions.

Schmidt noted while scientists have been dismissed by some as unrealistic, the call for a 50 percent emissions cut by business leaders "helps give credence to the idea that it's achievable."

Policy analysts, who were not part of either petition, split on how meaningful the two petitions are.

What is happening is people are agreeing "that the cost of inaction is on the high side and the cost of action is affordable," said Joseph Romm, a policy analyst at the liberal think-tank Center for American Progress, energy business consultant and trained physicist.

But Jerry Taylor, a senior fellow at the libertarian Cato Institute said "scientists are in no position to intelligently guide public policy on climate change." Scientists can lay out scenarios, but it is up to economists to weigh the costs and benefits and many of them say the costs of cutting emissions are higher than the benefits, he said.

Granger Morgan, a professor of engineering and public policy at Carnegie Mellon University, said he sees "a growing realization among a wide variety of players that we've got to stop talking about this and start some action." But, he added, "I'm not going to hold my breath that we're going to get anything."