Spain's Interior Ministry reported that police had found a treasure-filled chamber containing thousands of items including missing gold artifacts from Peru's glittering pre-Inca past and possibly from museums elsewhere. 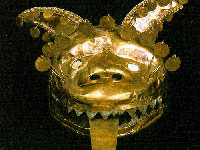 Museums around the world have been alerted to check their collections for missing art, after police investigators specialized in tracking down historical objects uncovered a privately owned reinforced chamber containing 1,800 items in the northwestern city of Santiago de Compostela.

The discovery followed a tip-off from Peru, warning Spanish authorities it suspected items that went missing following a 1997 pre-Inca exhibition were being held illegally in Spain, the ministry said in a statement.

Peruvian authorities had lost track of the priceless pieces as well as of the exhibition's organizer.

Following the find, Spanish police photographed the items, and 31 were identified as belonging to Moche Lords of Sipan tombs, archaeological constructions dating back 4,000 years.

Twenty-one of those pieces were gold, including four masks and one ceremonial costume made from gold plates.

Police have circulated photographs of the remaining items in the hideout to museums around the world to ascertain if any were suspected missing from their collections.

The whereabouts of the exhibition organizer, a Costa Rica citizen whose name was not released, were not known.