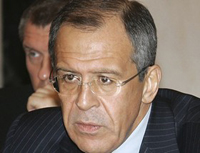 It seems that ties between Russia and the U.S. were damaged by Russian foreign minister Sergey Lavrov who accused Washington of a "serious rollback" in its proposals for cooperation with Moscow on missile defense in Europe.

Sergey Lavrov detailed Moscow's complaints that Washington has withdrawn a proposal for constant Russian monitoring of planned U.S. missile defense facilities in Poland and the Czech Republic, and had rejected an idea to jointly evaluate threats that would trigger activation of the system.

"There has been a serious rollback from what we were told," Lavrov said, referring to October meetings in Moscow with Secretary of State Condoleezza Rice and the two countries' defense chiefs.

"We are, frankly, disappointed," Lavrov said. He said formal U.S. proposals submitted late last month "added nothing new to the situation that existed before" the visit by Rice and Defense Secretary Robert Gates.

The visit and the U.S. proposals were part of an effort to ease Russian concerns about plans for an interceptor facility in Poland and a radar in the Czech Republic that have infuriated Moscow and strained relations.

The United States says the installations in the two former Soviet satellites - both now NATO members - would counter a looming Iranian threat.

Moscow disputes Washington's evaluation of the threat from Iran, where it is building a nuclear power plant, and says the system is a potential threat to Russia.

Lavrov had already criticized the formal offers as a retreat from U.S. promises, but he detailed Russia's complaints further Wednesday.

He suggested that in October, the U.S. had said Russian personnel could be stationed permanently at the sites to monitor their operations. The formal proposals, he said, offer only intermittent visits - subject to Polish and Czech approval.

"This is a completely different story from what was proposed to us verbally," Lavrov said.

In a nod to Russia's concerns, the United States has offered to hold off activating the missile defense facilities until a concrete threat emerges.

But Lavrov said that under the formal proposals, threats would be evaluated "not jointly but by the United States, based on its own analysis."

"This is a radical contradiction to our approach," he said.

Lavrov also accused the U.S. of undermining "important" efforts to convince other nations to abide by the Soviet-era Intermediate-Range Nuclear Forces Treaty.

At a recent Organization for Security and Cooperation in Europe meeting, the United States rejected a Russian proposal for a resolution urging all nations to adhere to the INF treaty, Lavrov said.

Rice and Lavrov, who spoke by telephone Tuesday, also are expected to meet at NATO headquarters in Brussels, Belgium, on Friday.