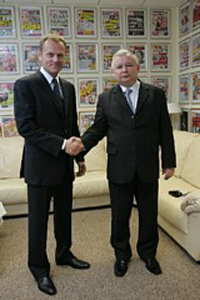 Polish prime minister and president met Wednesday to try to resolve some differences in their political view.

President Lech Kaczynski invited Prime Minister Donald Tusk and Foreign Minister Radek Sikorski to the presidential palace - separately - for their first working meetings. They were expected to discuss policy toward Russia, a plan to withdraw Poland's troops from Iraq and ties with the U.S. government.

The meetings are drawing great attention following days of tough-talk from presidential aides accusing Tusk's two-week-old Cabinet of failing to consult Kaczynski on critical matters. Tusk, in response, has insisted he is the one who decides policy issues.

The president is closely tied to the conservative Law and Justice party of his twin brother, Jaroslaw Kaczynski, and the conflict has come as no surprise. Jaroslaw Kaczynski lost his post as premier after his party was defeated Oct. 21 by Tusk's pro-business Civic Platform.

The first major rift between the president and the new premier appeared last week after Tusk publicly announced foreign and domestic policy plans that differed markedly from those of his predecessor.

Media reported the president was irritated with Tusk for softening Warsaw's approach toward Russia by lifting Poland's veto to Moscow opening membership negotiations with the OECD.

Reports also said the president, who has recently shunned public statements, was displeased with Tusk's announcement that his government would withdraw Poland's 900 troops from Iraq next year. The president has spoken in favor of keeping the troops there longer.

Another matter of strife was Tusk's vow to consult with NATO and Russia on a plan to host a part of U.S. missile defense shield before continuing talks with Washington that began earlier this year. Jaroslaw Kaczynski's government strongly favored hosting the base, and had hoped to conclude negotiations this year.

Sikorski was defense minister in Jaroslaw Kaczynski's government but quit over policy disagreements with the brothers. The bad feelings seem to have lingered.