A man who disappeared more than five years ago in a canoeing accident in the North Sea showed up, claiming that he had lost his memory. He was arrested on fraud charges. 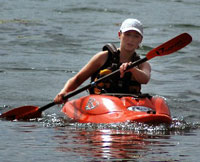 Cleveland police in northeast England said John Darwin, 57, was arrested on fraud charges in connection with their investigation of his apparent disappearance.

And one tabloid, the Daily Mirror, claimed that Darwin and his wife had been seen together in Panama since his disappearance.

Police Detective Superintendent Tony Hutchinson, leading the investigation, said police were trying to piece together where Darwin had been for the last five years and issued a public appeal for information on his whereabouts.

Detectives are considering the possibility of extraditing Anne Darwin from Panama to be questioned in Britain.

John Darwin had been working as a prison officer when he disappeared after going out into the North Sea in his canoe, which was later found wrecked on a beach. A coroner officially declared him dead.

But on Saturday, Darwin walked into a London police station.

The Daily Mirror and The Sun newspapers quoted Anne Darwin as saying he claimed her husband's life insurance benefits in good faith, believing he was dead.

"They were claimed in good faith when I believed I had lost my husband," The Sun quoted her as saying. "Of course there is a possibility they may now have to be repaid. It is one of the many things I am struggling to come to terms with."

The Daily Mirror said its photo shows the Darwins in Panama last year when they stayed in an apartment rented through the firm Move to Panama. The newspaper ran a photo that it said was taken in July 2006, which appears to show them with the firm's boss Mario Vilar.

Vilar said they had not used the surname Darwin.

Anne Darwin, 55, was quoted by the Daily Mirror as saying that she received money from her husband's life insurance policies after he disappeared, but she denied that he faked his disappearance due to financial problems.

She was quoted as saying she had not seen him since he disappeared and that his reappearance last weekend was "the moment I've always prayed for."

"I'm as amazed as anyone else," she said before her husband's arrest.

Anne Darwin said her relatives were shocked when she moved to Panama City six weeks ago after selling the couple's home in Seaton Carew, 250 miles (400 kilometers) north of London.

She said she had spoken on the phone to her husband this week and planned to return to Britain to see him once she had resolved some visa problems and her furniture had been delivered from Britain.

If she were to face charges in the case, Britain has an extradition treaty with Panama, the Home Office said.

In England, Darwin's aunt, Margaret Burns, 80, told reporters the truth may be established "if we wait a bit."

"What's the point in speculating when we don't know? I'm as intrigued as anybody about what happens next," Burns said.

"Most of the family believe the trauma of nearly drowning in the canoe was enough to make him lose his memory, but I'm not so sure. I'm a cynic now. To be honest I don't believe he ever got his feet wet."