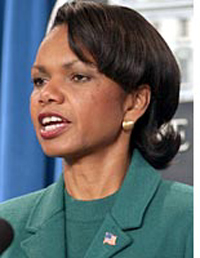 President Mahmoud Ahmadinejad said Wednesday that a U.S. intelligence review concluding Iran had stopped developing an atomic weapons program in 2003 was a "declaration of victory" for Iran's nuclear program.

The U.S. intelligence report released Monday concluded that Iran had stopped its weapons program in late 2003 and shown no signs since of resuming it, representing a sharp turnaround from a previous intelligence assessment in 2005.

"This is a declaration of victory for the Iranian nation against the world powers over the nuclear issue," Ahmadinejad told thousands of people during a visit to Ilam province in western Iran.

"This was a final shot to those who, in the past several years, spread a sense of threat and concern in the world through lies of nuclear weapons ... Thanks to your resistance, a fatal shot was fired at the dreams of ill-wishers and the truthfulness of the Iranian nation was once again proved by the ill-wishers themselves," Ahmadinejad said, drawing celebratory whistles from the crowd.

Iran has touted the new U.S. intelligence report as vindication of its claims that its nuclear program is peaceful and Iranian officials insist that Washington should take a less hawkish stance and drop attempts to impose new sanctions in light of the report's surprise conclusions.

President Bush defended his approach Tuesday, and Secretary of State Condoleezza Rice a day later called Iran "dangerous" and warned against easing any diplomatic pressure on Iran despite the new U.S. findings.

"It is the very strong view of the administration that the Iranian regime remains a problematic and dangerous regime and that the international community must continue to unite around the Security Council resolutions that have passed," she said Wednesday during a visit to Ethiopia.

The finding comes at a time of escalating tensions between the United States and Iran.

The United States and some of its allies accuse Iran of seeking to develop nuclear weapons, a claim denied by Tehran, which says its nuclear program aims only to generate electricity.

Iran has rejected two U.N. Security Council resolutions demanding that it halt uranium enrichment, a process that can produce either fuel for a reactor or a nuclear warhead.

While Rice urged nations such as China and Russia not to harden their stance against a new round ofsanctions, Russian Foreign Minister Sergey Lavrov expressed doubt about whether Iran had ever sought nuclear weapons to begin with.

"Data that we have seen don't allow to say with certainty that Iran has ever had a nuclear weapons program," he said Wednesday when asked about the report.

"We will assess the situation regarding a new U.N. Security Council resolution taking into account all these facts, including the U.S. confirmation that it has no information about the existence of a nuclear weapons program in Iran," he added.

Analysts said it may be hard to maintain support for a swift new U.N. resolution that would further restrict trade with Iran.

"An enormous effort has been invested to date in trying to bring the Russians, Chinese and Europeans on board with the current sanctions ... and this report doesn't appear to have been widely anticipated among our allies," said Suzanne Maloney, a foreign policy senior fellow at the Washington-based Brookings Institution.

"Now you have the U.S. intelligence community coming out and saying formally that Iran halted its weapons program four years ago. This will certainly undercut any push to get new sanctions," she added.

European and U.N. officials said the report bolsters their argument for negotiations, and that the international community should not walk away from years of talks with an often defiant Tehran that is openly enriching uranium for uncertain ends.

They also said sanctions are still an option to compel Iran to be fully transparent about its nuclear program.

But China _ a veto-wielding member of the U.N. Security Council - said the report raises second thoughts about new sanctions. U.S. and French officials had said only a day earlier that long-resistant China was warming to a new resolution.

"I think the council members will have to consider that, because I think we all start from the presumption that now things have changed," China's U.N. Ambassador Wang Guangya said Tuesday when asked whether the release of the new intelligence estimate made the prospect of new U.N. sanctions less likely.