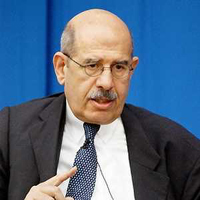 A new U.S. intelligence review that said that Iran had stopped a nuclear weapons program in 2003 “somewhat vindicated” the Muslim nation, the head of the U.N. atomic watchdog agency said Wednesday.

International Atomic Energy Agency director-general Mohamed ElBaradei called the report a "sigh of relief" because its conclusions also jibe with the agency's own findings.

"Iran has been somewhat vindicated in saying they have not been working on a weapons program, at least for the past few years," ElBaradei told reporters in Brazil's capital.

ElBaradei said he had not been provided with a copy of the document in its entirety that includes classified information, but said the public portion released was enough evidence to conclude that Tehran has not recently been trying to develop a nuclear weapons program.

"It is consistent with what the agency and I have been saying for a number of years," ElBaradei said.

He also said the release of the report signaled an opportunity for Tehran to prove it has no plans to develop a weapons program, and said Iranian authorities should seize the opportunity to prove that they have peaceful plans for nuclear energy.