Children recruited as soldiers in Philippines 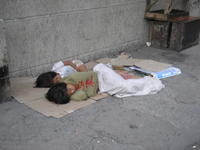 Children recruited as soldiers in Philippines

Philippine children suffer their human rights violations because of armed conflicts in the Philippines between 2001 and 2006 involving communist and Muslim rebels, UNICEF said Wednesday.

The violations of human rights included forced evacuation, torture and recruitment as rebels, the report said.

Some children were killed and others were forced to serve as messengers, guides or spies for soldiers, said the study conducted for UNICEF by the local IBON Foundation and two other private groups in eight communities where the communist New People's Army or the Muslim separatist Moro Islamic Liberation Front operate.

The study said it did not find any evidence of forced recruitment of children as fighters, but there were indications that children eagerly volunteered to join rebels. Some parents gave their consent and communities often approved, the study said.

The authors and UNICEF said no statistics were available for the number of child combatants. But there was evidence of minors who volunteered for the rebels as cooks, couriers and other less hazardous duties, according to the study.

It said a survey of 122 communist rebel respondents and interviews with community members found general compliance with a 1999 policy of the underground Communist Party setting a minimum age of 18 for rebel combatants.

"There is enough evidence that there is soldiering going on," said UNICEF representative to the Philippines Nicholas Alipui. The impact of armed conflict on child health, education and social well-being is "devastating," he said.

He said Filipino children are not abducted or indoctrinated into armed groups like child soldiers in other parts of the world, but naturally learn the use of arms and spying because they live in communities where combatants and civilians intermingle.

"Children have no place in any armed conflict even if they want to," he said.

At least, 200 000 children became the victims of human rights violations.