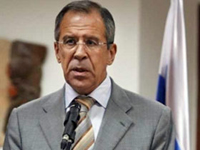 Talks between Kosovo’s ethnic Albanian majority and Belgrade were hampered by West with its strong support for the province’s independence, Russian foreign minister Sergey Lavrov said.

"Regrettably, our Western partners are blocking such movement by saying that Kosovo's independence is unavoidable," Lavrov said at a news conference. He said the Serbs and the ethnic Albanians need to continue their talks on Kosovo's status until they reach a solution.

Lavrov lauded Serbia for making "serious proposals," adding that they could provide a basis for compromise. He emphasized that Kosovo's status could only be decided by the United Nations Security Council.

The issue of Kosovo's future status has become one of the main irritants in the increasingly chilly relations between a newly assertive Moscow and the West. Russia, with the threat of a U.N. Security Council veto, helped Serbia scuttle efforts earlier this year to adopt a Western-backed plan granting Kosovo internationally supervised independence.

Mediators from the European Union, Russia and the United States are racing to narrow the gap between Serbia and Kosovo's leadership before a Dec. 10 deadline for reporting back to the U.N. secretary-general.

Russia has warned the West against encouraging the Albanians to declare independence and stressed that talks should continue if no agreement is reached by the deadline.