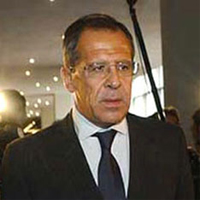 There is no proof that Iran has ever run a nuclear arms program, Russian foreign minister Sergey Lavrov said.

"Data that we have seen don't allow to say with certainty that Iran has ever had a nuclear weapons proram," Lavrov said, asked to comment on the U.S. intelligence report saying that Iran suspended its efforts to develop nuclear weapons in 2003.

He hinted that the U.S. acknowledgement that Iran now isn't running a nuclear weapons program would affect Washington's push for a new set of U.N. sanctions against Iran.

"We will assess the situation regarding a new U.N. Security Council resolution taking into account all these facts, including the U.S. confirmation that it has no information about the existence of a nuclear weapons program in Iran," Lavrov told reporters after talks with his Armenian counterpart.

"We have no information that such efforts had been conducted before 2003, even though our American colleagues said it was so," Lavrov said.

Lavrov said that the International Atomic Energy Agency should continue its work in Iran to clarify all outstanding issues related to Tehran's nuclear program.