One of Lindsay Lohan's former bodyguards claims that a magazine ruined his career by publishing his photos together with an outspoken article. 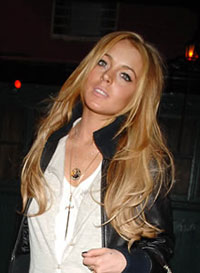 Andrae "Doc" Renard Newman filed a libel suit against Star magazine Monday in Los Angeles Superior Court, alleging he was misidentified as Lee Weaver, another of Lohan's former bodyguards, in a photo caption accompanying the article.

The story was entitled "Lindsay's Bodyguard Bares All! Her Sick Secret World" and appeared in Star's July 25, 2007 edition.

According to the lawsuit, the editors knew the caption was wrong but published it anyway.

"As soon as Star was notified that we identified the wrong bodyguard in the photo caption of the Lohan bodyguard tell-all, Star immediately withdrew the article from its Web site and corrected, retracted and apologized for the error," said Editor-in-Chief Candace Trunzo.

Newman says his reputation as a celebrity bodyguard was damaged because potential clients demand privacy and trustworthiness, and he could lose his job as a security guard at a Hollywood club.

"All the people in this industry sign confidentiality agreements and he's no exception," said Newman's attorney, Greg Stone. "Even if he didn't sign, he would never kiss and tell or disclose confidences. People trust this guy."

Stone said the mistake was compounded because Newman is known to many people only by his nickname, Doc" When clients and colleagues saw Lee Weaver under his picture, Stone said, they likely assumed that was his real name.

Newman, who says he has worked as a professional bodyguard for the past 20 years, is suing for lost income and unspecified compensatory, exemplary and punitive damages.