One of seven members of the church which is now non-existent was returned guilty of molesting his 2-year-old daughter and a boy. Members of this church were accused of raping children during their rituals. 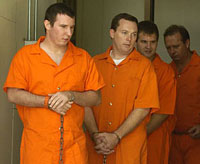 A state district court jury in Amite on Monday convicted Austin "Trey" Bernard III in the rape of his daughter as well as the rape of a 12-year-old boy, prosecutor Scott Perrilloux said.

Bernard, 39, denied the charges, but three earlier confessions and a journal that seemed to detail the practices of the group were too much to overcome, said Al Bensabat, the public defender who represented him.

"Once the jury read that it was all over," Bensabat said Tuesday.

Bernard, who faces a mandatory life prison term without parole when he is sentenced on Jan. 12, was being held in jail on Tuesday.

No trial date has been set for the remaining six defendants. Perrilloux said he anticipates bringing the former minister of Hosanna Church , Louis Lamonica, to trial in early 2008. Lamonica has pleaded not guilty.

The allegations have rocked the small town of Ponchatoula , about 40 miles (65 kilometers) northwest of New Orleans .

The activities at the church became known when Lamonica walked into the Livingston Parish Sheriff's Department and asked to speak with a detective in 2005, Chief of Detectives Stan Carpenter said.

For almost two hours, Lamonica, 49, told investigators how he and other church members had molested children, and taught them to have sex with each other, as well as with a dog, authorities said.

Lamonica told the detectives that he drank cat blood and poured it on the bodies of his young victims.

"We were totally stunned," Carpenter said.