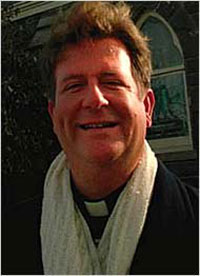 Fay, who pleaded guilty to a federal fraud charge in September, set up secret bank accounts to pay for travel around the world and to buy a condominium, authorities have said.

In a courtroom apology, the 56-year-old Fay said his mistakes have brought shame to his parishioners, his family and friends.

"I beg you for your mercy," Fay said, who has prostate cancer. "Do not send me to prison. I am already in prison."

Federal prosecutors asked that Fay be sentenced to at least four years but were pleased with the outcome.

"This crime quite frankly transcends dollars," prosecutor Richard Schecter said. "It took place unabated and in a growing fashion. Mr. Fay served himself."

Fay resigned last year as pastor of St. John Roman Catholic Church in Darien after investigators working for the Catholic Diocese of Bridgeport said Fay used church money for limousines, stays at top hotels around the world, jewelry and clothing from Italy.

The priest shopped at Bergdorf Goodman, Saks Fifth Avenue and Nordstrom, drove a Jaguar, attended a sports club, bought jewelry from Cartier, spent $130,000 ( EUR 88,190) for limousine rides for himself and his mother, and stayed at hotels such as the Ritz Carlton, Hotel De Paris and the Four Seasons Hotel, the church report found. Fay has repaid nearly $280,000 ( EUR 189,950).

The sentence, she said, "is a message that not even the collar can protect you from prison," she said.

In a news release, the diocese called Tuesday's proceedings "a day of great sorrow for all concerned."

Fay is to report to prison April 2.