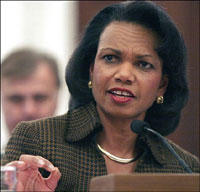 "I am increasingly concerned about several crisis spots in Africa, and this is a good opportunity to take stock of where we are and help move international efforts forward on each of those," Rice said ahead of her arrival in Ethiopia, where the African Union is based.

While in Addis Ababa, Rice is to see key players in some of those crises, from insecurity in Africa's volatile Great Lakes region to conflict in western Sudan's Darfur province, a fragile North-South Sudanese peace, and chronic instability in lawless Somalia.

She also plans talks with Ethiopian Prime Minister Meles Zenawi, a U.S. counterterrorism ally criticized for a crackdown on political opponents and whose country shares a tense border with arch-foe Eritrea .

"We don't need a use of force here to deal with what is obviously a significant border problem," Rice told reporters aboard her plane en route to Addis Ababa, referring to a feared resumption of the 1998-2000 Ethiopian-Eritrean war that killed tens of thousands of people.

The war ended with a peace agreement but the border issue remains unsettled as Ethiopia never fully accepted the delineation of an independent commission that disbanded itself last week after the neighbors were unable to agree to mark the new frontier.

Rice is only the fourth secretary of state to visit Ethiopia and the first in a decade. Madeleine Albright made a stop in Addis Ababa in 1997, according to the State Department historian's office.

In her first meeting Wednesday, Rice was to see the presidents of Burundi , Rwanda , Uganda and the interior and foreign ministers of Congo , whose nations make up a regional Great Lakes group trying to quell insurgents based in Eastern Congo, U.S. officials said.

Rice said dealing with these rebels is critical to re-establishing normalcy in a region that has been decimated by decades of war and genocide that have killed millions.

On Sudan, Rice said she would tackle elements of the Darfur conflict and the faltering peace deal that ended Sudan's long-running North-South civil war, even though President Sudanese President Omar al-Bashir's government has signaled it will not see her.

Rice said she wants to focus on overcoming logistical hurdles in Darfur to deploying a joint U.N.-African Union peacekeeping force for the vast region which has been ravished by years of conflict. "We're just going to have to remove these obstacles and get on with it," Rice said.

As for the 2005 peace deal between al-Bashir's government and southern rebels, she said "it's time to refocus our efforts there."

"That is really an agreement that we cannot afford to let unravel," Rice said.

The deal has run into trouble with the former Southern rebels pulling out of a unity government in Khartoum , accusing al-Bashir's government in the North of reneging on commitments, including sharing of political power and oil resources.

Rice said she would explore how to get the Southern Sudanese "to re-enter the government."

On Somalia , which has been locked in chaos without a functioning central authority since 1991, Rice said she would impress on the new prime minister of the country's ineffective transitional government the need to be inclusive in his administration.

Four ministers in the government resigned on Tuesday, less than a day after the Cabinet was named, to protest their clans' representation, prompting Rice to wryly comment: "It's not the easiest situation in Somalia , but when has it been?"

"The Somali leadership is going to have to really reach out to all the elements that are not associated with terrorism," Rice said. "It has to be broad and that's really my message to the prime minister. He has to find a way to broaden his base of support."

Last year, a radical Islamist movement accused of links with al-Qaida seized control of much of the southern part of Somalia , prompting Ethiopia to invade in December 2006 with Washington's tacit backing.