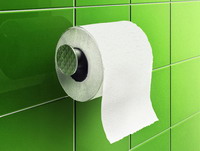 Bach won $100 (68 EUR) plus court costs after she sued Kmart for illegally collecting 28 cents tax on a 12-roll package of toilet paper.

Although most paper goods are taxed in Pennsylvania, toilet tissue is listed as a nontaxable necessity by the state Department of Revenue.

The discount store chain offered to settle the case out of court before a Thursday hearing in Western Pennsylvania, but Bach refused because it would have required her to sign a confidentiality agreement.

"I would lose my ability to spread that message if I were gagged," Bach said after the verdict by a Monroeville district judge.

Bach, of Murrysville, sued in October after a Kmart store in Monroeville twice collected a 7 percent tax on her $3.99 (2.70 EUR) purchases.

Kmart, a unit of Sears Holdings Corp., said it will not appeal the verdict.

"We don't want to fight with our customers," Kmart spokeswoman Kim Freely said. "We apologize for the inconvenience and the problem is being corrected."

Bach said shoppers "need to look at every line" on sales receipts when they shop.

Bach brought the suit under the state's Unfair Trade Practices and Consumer Protection Law. Plaintiffs can sue for the amount of the damages or $100 (68 EUR), whichever is more.

"I want consumers as they shop during the important holiday to be aware of what is and what isn't taxable," Bach said.