An American student and her Italian ex-boyfriend were ordered to remain in jail as suspects in the slaying of a 21-year-old Briton. 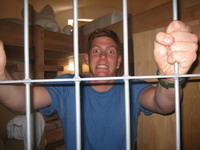 The decision Friday by the three-judge panel was made shortly after Amanda Marie Knox, 20, appeared before the court to proclaim her innocence. Knox and Raffaele Sollecito have been jailed in this central Italian city since Nov. 6.

A lawyer for Sollecito, Marco Brusco, said the judges did not release the reasoning for their ruling. They are expected to do so over the next few days, Brusco said.

Meredith Kercher, a student from Leeds University in England and enrolled for a year of study in Perugia, was found dead Nov. 2 in the apartment she shared with Knox. She died from a stab wound to the neck, and prosecutors said she was killed resisting a sexual assault.

The detention of Knox, 20, and Sollecito was upheld by a judge a few days after their arrest. The judge said there was enough evidence against the two students to hold them while the investigation continued. Lawyers appealed that decision and both suspects deny wrongdoing.

Knox and Sollecito were both present for the closed-door hearing, police officials and lawyers confirmed.

"We are happy and confident because we were able to fully explain our point of view," said Knox's lawyer, Luciano Ghirga. "Amanda made a very brief statement proclaiming her innocence."

Knox has given conflicting statements since the killing, first saying she was not home the night of the slaying and later telling prosecutors she was in the apartment and had to cover her ears to drown out Kercher's screams.

According to prosecutors, a drop of Knox's blood found on a bathroom faucet places her at the apartment on the night of the murder or the morning after, and DNA from Knox and Kercher was found on a knife that investigators believe may have been the murder weapon.

The knife was found in Sollecito's home, and a bloody footprint located near Kercher's body has been matched to his shoes, placing the 23-year-old Italian at the crime scene, prosecutors say.

Lawyers maintain there is not enough evidence linking the knife to Kercher's wounds nor the shoes to the footprint.

Sollecito says he was at his own Perugia apartment, working at his computer, but does not remember if Knox spent the whole night with him. Both suspects have explained confused recollections and conflicting statements by saying they had smoked hashish that night, according to court documents.

Besides Knox and Sollecito, Ivory Coast national Rudy Hermann Guede is also being held as a suspect. He was arrested in Germany after an international manhunt and is awaiting extradition to Italy.

Guede has acknowledged that he was in Kercher's room the night she died, but said he didn't kill her and that an Italian who is trying to frame him did. It is not clear whom Guede accused. DNA testing has confirmed that he had sex with Kercher the night of the murder.

A fourth person, Diya "Patrick" Lumumba, a Congolese who owned the Perugia bar where Knox worked, was released from jail for lack of evidence. Lumumba, initially fingered by Knox as the killer, has not been formally cleared and denies wrongdoing.