President George W. Bush is going to give an additional $30 billion (20.32 billion EUR) for the fight against AIDS worldwide over the next five years, and to visit Africa early next year to further highlight the need and his administration's efforts. 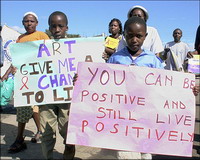 "We dedicate ourselves to a great purpose: We will turn the tide against HIV/AIDS - once and for all," Bush said. "I look forward to seeing the results of America's generosity."

Bush chose the gymnasium at the Calvary United Methodist Church in this tiny western Maryland town to make his remarks. The church supports a Christian group home and school in Namibia for children orphaned by the disease. Before speaking, he met with representatives from churches and other religious groups that have been fighting AIDS, part of his attempt to highlight his belief that faith-based organizations are the best vehicles for such work.

Evangelical Christians, who make up a large and influential portion of Bush's political support, have been key to his policies increasing U.S. involvement in the fight against AIDS, particularly in Africa. Bush has been said to believe that the United States, and his administration, do not get enough credit for the work being done on the issue.

"Every year American taxpayers send billions of their hard-earned dollars overseas to save the lives of people they have never met," he said.

But "in return for this extra generosity, Americans expect results," the president said, adding that his program demands measurable progress, accountability and the involvement of local partners. The result: The number of people in sub-Saharan Africa receiving treatment for AIDS has gone from 50,000 five years ago to nearly 1.4 million now.

"We have pioneered a new model for public health," Bush said. "So far, the results have been striking."

In May, the last time he devoted a speech to the topic, Bush asked Congress to double the $15 billion (10.16 billion EUR) that the U.S. committed over the program's first five years to therapy, testing and counseling through the President's Emergency Plan for AIDS Relief. The program is active in 120 countries, with a concentrated focus on 15, including Namibia, in sub-Saharan Africa, Asia and the Caribbean.

As of the end of September, 1.36 million people in those focus countries have received antiretroviral treatment through the program, with a focus on averting infant infections by treating pregnant women. Others receive testing and counseling.

"Some call this remarkable success. I call it a good start," Bush said, adding that he has worked with other nations and the private sector to increase their commitments.

Doubling the funding for PEPFAR would provide treatment for 2.5 million people, the White House said.

The Children of Zion Village, an orphanage in northeastern Namibia, was opened in 2003 by missionaries Gary and Rebecca Mink of Rising Sun, Maryland. They belong to Mount Zion United Methodist Church in Bel Air, which provides most of the home's $14,000(9,484 EUR)-a-month operating funds with help from other United Methodist churches in Maryland and Ohio, said Lisa McLaughlin, board chairwoman of Children of Zion Inc.

The facility is home to 55 children up to 17 years old. Children of Zion also feeds 116 more orphans in nearby Mafuta and hopes to build a group home and preschool there.