Buses and state railroad cars were used to carry President Robert Mugabe's supporters from across the country for a march and rally near Harare Friday. 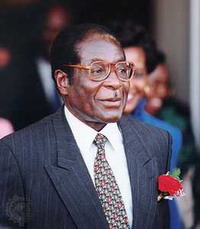 The rally was a show of strength for Mugabe before a party meeting next month at which his continued leadership was likely to be debated, and before presidential elections next year in which he was expected to run.

"The people will speak. Outsiders must keep their hands off," Mugabe said to cheers from supporters.

He also ridiculed Britain, the former colonial power, for "discussing us every week in their stupid parliament."

An estimated 40,000 supporters marched from downtown Harare to a one-time sports field in the nearby township of Highfield, where they were joined by thousands more rural supporters carrying umbrellas against seasonal rains.

Ruling party militants had billed the event as "the march of a million" supporters to pledge support for Mugabe as the ruling party's sole candidate for presidential elections in March.

No official count of those present was available, but it was the biggest political rally seen for several years.

Mugabe has been accused within his ruling Zimbabwe African National Union Patriotic Front party of being responsible for chronic shortages of food and basic goods in the worst economic crisis since he led the nation to independence in 1980. He has led Zimbabwe since independence.

Two main factions in the ruling party have called for him to step down to make way for reformist leaders but they were seen as unlikely to be able to garner significant public displays of support while the police and military remained largely loyal to Mugabe.

Militant supporters of Mugabe last month said they were organizing a solidarity campaign of marches and rallies across the country that would culminate in a mass demonstration in support of Mugabe in Harare ahead of the Dec. 11 party convention.

Mugabe has presided over an economic meltdown that, according to United Nations estimates, will leave nearly one-fourth of the population in need of emergency food handouts in the coming year.

The nation is suffering official inflation of 8,000 percent, the highest in the world.

Mugabe blames Western economic sanctions, successive years of drought and speculators in the economy for driving up inflation by creating shortages that fueled black market trading at prices of up to 10 times the government's fixed prices.

The often violent seizures of thousands of white-owned commercial farms for handing over to blacks since 2000 disrupted the agriculture-based economy and saw farm production plummet in the former regional breadbasket.