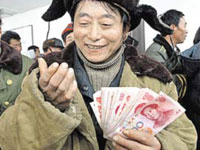 Police arrested four men on suspicion of involvement in a human smuggling ring that brought Chinese to England.

In a statement, the national prosecutor's office said the suspects were two Iraqi men, aged 22 and 27, one Iranian man, 19, and one Dutch woman, 27. Their names were not released.

The four are suspected of involvement in a ring responsible for two incidents in recent months when 31 illegal immigrants were discovered in the backs of trucks bound for England.

"The organization of the human smuggling was presumably in the hands of a group of Iraqis," the statement said. "They operated by smuggling illegal passengers inside trucks in the cargo hold of a ferry boat."

The suspects were arrested Wednesday and brought before a judge Friday.