Fidel Castro warned his close friend and socialist ally Venezuelan President Hugo Chavez to watch out for U.S.-backed assassination attempts, and recommended to avoid open-top vehicles that could be targeted by snipers. 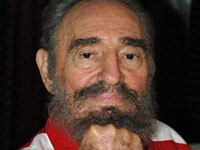 The 81-year-old Castro said Venezuela is facing "a world tyranny" as voters decide Sunday on constitutional changes that would give Chavez unchecked power to further transform the South American country into a socialist state.

"The empire has created conditions conducive to violence and internecine conflicts" in Venezuela, Castro wrote in an essay published in Cuba's two leading official newspapers, referring to the U.S.

Castro has not been seen in public since emergency intestinal surgery forced him to cede power to his younger brother Raul in July 2006. Since then, no foreign head of state has visited the ailing revolutionary more than Chavez, who was last in Cuba less than two weeks ago.

"On Chavez's recent visit last Nov. 21, I seriously discussed with him the risks of assassination as he is constantly out in the open in convertible vehicles," wrote Castro, who himself survived dozens of CIA-backed attempts on his life since leading the Cuban revolution in 1959. Castro noted his own experience as a combatant trained in the use of automatic weapons with telescopic sights.

The Cuban leader said the U.S. should consider that if Chavez were killed or a civil war broke out in Venezuela, the world economy would "blow up" because of the importance of that country's huge oil reserves.

His comments came a day after more than 100,000 people flooded Venezuela's streets to oppose 69 proposed constitutional changes to the nation's 1999 constitution that would, among other things, create forms of communal property, eliminate presidential term limits, and increase presidential authority.

Critics claim the reforms would give Chavez dictatorial power. The Venezuelan president, who has for weeks denounced vague, U.S.-backed plans to destabilize his government, counters that the revisions are necessary to give the public a greater voice in government.

Castro said threats against Chavez will not end with Sunday's vote.

"A victory of the 'yes' vote on Dec. 2 would not be enough. The weeks and months following that date may very well prove to be extremely tough for many countries, Cuba for one," he wrote.

Venezuela has been instrumental in Cuba's recovery after the collapse of the Soviet bloc brought the island to the brink of economic collapse in the early 1990s.

Chavez's government sends nearly 100,000 daily barrels of oil per day to Cuba in exchange for social service assistance. Castro said Friday that trade between both countries has now reached US$7 billion (€5 billion) annually.