Netherlands to extend participation in Afghanistan

Dutch prime minister claimed the Netherlands planed to extend its participation in the NATO force in Afghanistan by two years. 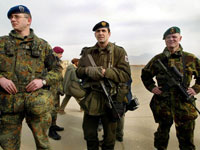 Netherlands to extend participation in Afghanistan

Jan Peter Balkenende said the Dutch will reduce their troop levels by 200-300 soldiers from the current 1,650, citing support from France and Australia, among others, to fill the gaps.

"Today the Cabinet has decided it will make a new commitment to the ISAF mission in Afghanistan, for 2 years from Aug. 1, 2008," Balkenende said at a press conference after the weekly Cabinet meeting.

The bulk of Dutch troops are based in the restive southern province of Uruzgan. Their mission was due to expire in August.

On Thursday, al-Qaida chief Osama bin Laden called on European countries to stop helping the U.S. military in the country.

Balkenende's Cabinet has been agonizing for months over the fate of the Dutch mission. It was originally assigned to help rebuild the southern province of Uruzgan, but became embroiled in continual battles with Taliban forces.

"The risks associated with this mission are considerable," Balkenende said.

A dozen Dutch troops have died in Afghanistan. NATO allies have urged the Dutch to stay after their two-year mandate expires next August, warning a withdrawal could trigger similar moves by other countries.

An extension must be approved by Parliament, where Balkenende's centrist coalition has a clear majority.

Bin Laden said it was unjust for the United States to have invaded Afghanistan for sheltering him after the Sept. 11 attacks, saying he was the "only one responsible" for the deadly assaults on New York and Washington in 2001.

Dutch diplomats have lobbied NATO allies for more support in Uruzgan, arguing that countries with much larger armies than the Netherlands are not pulling their weight - stationing their troops in relatively safe regions of Afghanistan.

At a NATO meeting in October, diplomats said nine nations had come forward with more troops to bolster the 41,000-strong NATO force. The offers ranged from 20 to 200 troops from countries including Slovakia, Hungary, the Czech Republic and non-NATO members Georgia and Croatia.

Officials said it could add around 1,000 extra troops in total. It was not clear how many would be sent to the south.

All NATO nations have troops serving with the allied force, ranging from nine Luxembourgers to 15,000 Americans. France has 1,000 troops mostly based around the Afghan capital, Kabul. Germany has 3,000 in the relatively stable north.